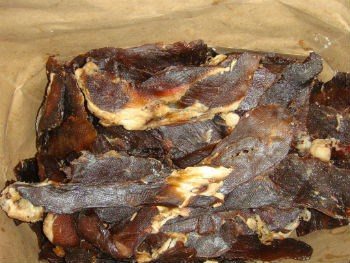 Meat from the alpaca is known for being among the most healthy and flavorful in the world. Traditionally, Alpaca meat has been a staple of Andean cultures for thousands of years. The meat carries less cholesterol, fat and calories than other common meats such as beef, pork and chicken and is extraordinarily lean. The best jerky from alpaca meat is 100% handmade and free from MSG, additives, fillers and nitrates. Solid alpaca meat can be marinated in soy, brown sugar, garlic, onion, salt and pepper. Alpaca meat is all-natural and contains no steroids or growth hormones. Additionally, alpaca jerky carries less sodium than other similar jerkies.

Beef is probably the most popular and versatile of all meats to make jerky. Dozens of flavors of beef jerky are popular including: original, spicy, teriyaki, peppered, sweet & spicy, garlic, black pepper, habañero and more. The classic original flavor is made by marinating beef in soy sauce, brown sugar, salt, garlic onions and spices. Spicy beef jerky is marinaded using extra spice. Teriyaki beef jerky uses the same recipe as the original, but substituting teriyaki soy sauce for regular soy sauce. Peppered jerky is seasoned using extra black peppers. Sweet & spicy beef jerky uses extra brown sugar. The best beef jerky is made from top selections of U.S. beef, which is cut in thick or thin strips depending on your liking. The jerky is then marinated and cured using hickory smoke. Top jerky is 100% free of additives or nitrates and is all-natural with no fillers.. 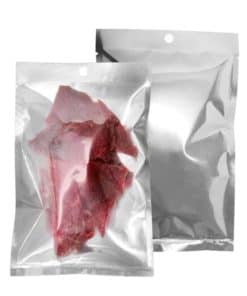 Buffalo are also referred to as bison and are normally raised with no growth hormones and free from steroids. Buffalo meat is high in protein, but low in fat and is endorsed as a healthy meat by the American Heart Association. Buffalo jerky can be made in a variety of flavors including gluten free, spicy, teriyaki, black pepper and more. The original flavor features a mild black pepper applied to thick-cut strips of top selections of meat. Top quality bison jerky is made completely by hand and contains no MSG, nitrates, fillers or additives. Buffalo jerky carries less salt than many comparable jerkies and is enjoyed as a healthy treat by people around the world on a daily basis. Jerky made from solid pieces of duck meat are marinated in teriyaki soy sauce, brown sugar, salt, garlic, onion and spices and then hickory smoked until cured to tasty perfection. The most sought after duck jerky is 100% handmade and contains no fillers, additives, nitrates or MSG. Wild ducks raised free from growth hormones and steroids are the best choice. Duck jerky has a mild, slightly sweet taste that is balanced by a slight zing of black pepper. Jerky made from duck meat is a perfect food to pack for lunches on the go.

Meat from the elk is naturally low in fat and cholesterol, high in iron and protein and said by many to have a unique taste, which is similar to beef. Elk that makes the best jerky are raised in a steroid- and growth hormone-free environment. Elk jerky is commonly available in several flavors, which include: original, gluten free, spicy and teriyaki. Thick pieces of meat are seasoned with soy sauce powder, brown sugar, salt, garlic, onion and spice and then cured in hickory smoke. The most desirable elk jerky is made from all natural mean and never contains additive, fillers, nitrates or MSG. Most meat used in elk jerky is prepared by hand.

Jerky lovers have several choices among a wide range of fish jerky options: wild salmon, peppered salmon, teriyaki salmon, Ahi Tuna, Rainbow Trout and even Shark. Fish jerky is high in protein and omega 3 fatty acids. The salmon is prepared by soaking in brine overnight and then cold smoked, locking in moisture and flavor. Then the jerky is hot smoked to fully cook and fuse flavors. Some of the best fish jerky is made using Yellow Fin Tuna. Of course, tuna caught in a dolphin-safe manner is preferred. Jerky made from Rainbow Trout is delicious as well. Fish jerky packs and travels well and is a perfect snack for those involved in outdoor activities, such as camping, hiking, hunting and fishing.

An exotic jerky option that is often seasoned with a mild pepper flavour is Kangaroo. Kangaroo meat is high in protein, omega 3 fatty acids and iron, and is enjoyed around the word. Kangaroo meat is lean and considered a red meat; it also makes delicious jerky. Thick strips of solid meat are marinated with soy sauce, brown sugar, salt, garlic, onion and spices before being smoked and cooked throughout. The result is a delicious and nutritional jerky that may be enjoyed anywhere. The best quality Kangaroo jerky is 100% handmade and all-natural with no fillers, nitrates or MSG ever added. The highest quality meat comes from kangaroos raised free from steroids and growth hormones and delivers a distinctive, unbeatable taste. Many compare the taste of ostrich meat to beef in that it has a similar red color. Ostrich meat used to make the most desirable ostrich jerky is raised free from growth hormones and steroids. It is also lean, high in iron, full of healthy protein and low in cholesterol. Strips of ostrich meat are marinated in soy sauce, brown sugar, salt, garlic, onion and spices. They are then cured in hickory smoke until they are cooked just right. Ostrich jerky is normally prepared by hand and contains no MSG, nitrates, fillers or additives. Ostrich meat is available from a number of suppliers in the United States and abroad. Ostrich jerky has less sodium that many other comparable jerkies and is a perfect snack when at home or on the go.

Salmon Jerky is made using fresh, wild salmon that is high in healthy omega 3 fatty acids. Salmon jerky is often available in several flavor choices: original, peppered and teriyaki. Solid strips of salmon are soaked in brine overnight and then cold smoked, which locks in moisture and flavor. Then the jerky subjected to a hot smoke that finishes the curing process. The result is a healthy and delicious salmon jerky that is enjoyed by people around the world. Smoked salmon is a delicacy. The best salmon for jerky making are raised free from steroids and growth hormones with no MSG, nitrates, additives or fillers used.

Though not the first meat that might come to mind when one thinks of jerky, delicious rattlesnake meat is available to consumers. Smoked rattlesnake meat is usually sold and shipped in tins and packed with seasoned broth that includes brown sugar, salt and natural smoke flavor. Rattlesnake meat may be eaten alone, with rice or pasta or a number of other tasty dishes. The best rattlesnake meat is all-natural and contains no MSG, nitrates or fillers. It is also free from steroids and growth hormones and has less salt than many comparable jerkies. Snake meat makes a novel and interesting gift and addition to any potluck.

Jerky made from the finest Rainbow Trout is delicious, healthy and makes a great snack both at home and away. Thick strips of Rainbow Trout are seasoned with miso tamari, sugar, garlic, black pepper, corn starch, oregano, sage, lime, salt and other spices before being hickory smoked to perfection. Jerky made from Rainbow Trout is high in omega 3 fatty acids and contains 10 grams of protein per serving. The most delicious jerky is handmade and contains no additives, fillers, MSG or nitrates. Wild Rainbow Trout is free from steroids and growth hormones and contains less salt than most other jerkies as well. Trout jerky is enjoyed by fish jerky lovers around the world. It makes a perfect snack and a unique gift!

Tuna might not be the first meat that comes to mind when one thinks of jerky. Tuna jerky, however, is delicious. Sushi grade Yellowfin Tuna are the premier choice used to make this high quality jerky. However, any tuna may be used. Tuna suppliers that fish in a dolphin friendly manner are preferable. Tuna is naturally high in protein and omega 3 fatty acids and low in fat. Thick strips of tuna meat are seasoned with soy sauce, corn syrup, black pepper, ginger, red pepper, salt, sorbitol, nutmeg, onion powder and glutamic acid and then cooked in hickory smoke. The resulting jerky has a mild, taste that is popular with many. Wild tuna is growth hormone- and steroid-free as well as free from preservatives, additives, fillers, nitrates and MSG. Tuna Jerky also has less sodium than many comparable jerkies. Turkey Jerky is often available in two delicious flavors: original and spicy. Many choose to enjoy turkey jerky during the thanksgiving holiday, but turkey jerky is a perfect snack or treat to enjoy year-round. The turkey meat is cut into thick, solid strips and then marinated in selected spices by hand. The pieces are then cured in hickory smoke until they are cooked throughout. The result is a delicious turkey flavored jerky treat. Top turkey jerky contains no additives, preservatives, fillers, nitrates or MSG. It is also made from turkeys which are raised free from steroids and growth hormones. Turkey jerky carries less sodium than most other jerkies and delivers a big, satisfying taste.

Venison selected from premium deers is the best choice to be made into venison jerky. Solid, thick strips of venison are marinated in soy sauce with brown sugar, salt, garlic, onions and other spices. The meat is then cooked to perfection using hickory smoke. This jerky has a tangy spice that is popular with jerky and venison lover alike. Venison is lean and high in protein and B vitamins. The most sought-after venison used to make jerky is free from both growth hormones and steroids. No nitrates, fillers, additives or preservatives are necessary. Venison meat may be store-purchased or meat from family hunts may be used.

Wild boar is described as having a sweet, nutty taste which is balanced with natural spices in jerky marinades. Thick cut strips of wild boar are seasoned with soy sauce, brown sugar, garlic, onions and spices before being cured using hickory smoke. Wild boar is leaner than farm-raised pork and its meat has a more pronounced shade of red. Meat used to make the top quality wild boar jerky is 100% hand prepared and free from preservatives, nitrates, additives, fillers and MSG. Wild boar that is raised in an environment free from steroids and growth hormones is the best choice. Wild boar meat is available from several sources. Try this exotic jerky option today!

Jerky made from the Tibetan yak meat is the finest available. This jerky is higher in protein and lower in calories and fat than beef, to which many compare its flavor. Yak is lower in calories when compared with bison, elk and even skinless chicken breast! It is an extremely lean meat. Thick-cut, solid pieces of yak meat are marinated in soy sauce, brown sugar, salt, garlic, onion and spices before being hickory smoked to perfection. Top yak jerky is 100% handmade and is free from nitrates, preservatives, fillers, additives or MSG. Yaks raised in the wild also have the benefit of having steroid- and growth hormone-free meat.

Find the right packaging for your Jerky